Halloween 2: The Primary Sources (or Lack Thereof) for the "Celtic" Background of Halloween (As Opposed to Unreliable Sources and Victorian Poppycock)

These are the ancient primary sources I’ve found so far.  If anyone finds more, please feel free to let me know in the comment line of my blog.
Now, here are some medieval Irish literary references to Samhain:
(1)   Tochmarc Emire, “The Wooing of Emer,” a text dated to the tenth century by Kuno Meyer;  here’s an electronic copy of the text: http://www.ucc.ie/celt/online/G301021/
(2)   Balor of the Evil Eye, a story from the saga text Cath Maighe Tuireadh (“The Battle of Magh Tuireadh”), which dates from the Old Irish period, ca. 600-900 A.D., and is preserved in a sixteenth-century manuscript; here’s the electronic copy: http://www.ucc.ie/celt/online/T300010/ and here’s another online version: http://www.sacred-texts.com/neu/cmt/cmteng.htm
(3)   The Fenian Cycle, mythological stories of the famous band of Irish warriors known as the Fianna and led by Finn McCool (Fionn mac Cumhaill), which was written down roughly in the twelfth century or so;  here’s a link for online texts: http://www.maryjones.us/ctexts/index_irish.html
(4)   Leabhar Gabhála Éireann, “The Book of the Taking of Ireland,” dating to the eleventh century in its earliest version which was compiled by an anonymous writer. Here is the reference to Samhain: §44. Two thirds of the progeny, the wheat, and the milk of the people of Ireland (had to be brought) every Samain to Mag Cetne. Wrath and sadness seized on the men of Ireland for the burden of the tax. They all went to fight against the Fomoraig (Lebor Gabala Eirinn Ed. Trans. R. A. S. MacAlister. Irish Text Society 1832).
(5)   Cath Crinna, “The Battle of Crinna,” from “The Book of Leinster,” ca. 1160, the manuscript of which is kept in Trinity College, Dublin; there is a reference to Samhain being the time when produce and crops were most mature.  Here’s an electronic version of the text: http://www.maryjones.us/ctexts/cathcrinna.html
These are the references to Samhain I’ve found so far.  By the way, none of these references link Samhain with All Hallow’s Eve in any way.  I have not been able to find any primary sources indicating that Samhain ever became All Hallow’s Eve.  There is a book by history professor Nicholas Rogers (at York University in Toronto), entitled Halloween: From Pagan Ritual to Party Night.  It was published by Oxford University Press in 2003.  In that book, Rogers states: “There is no hard evidence that Samhain was specifically devoted to the dead or to ancestor worship.”   Based on what I’ve found so far, I would have to agree with his statement.
The evidence I have found suggests that Samhain was a harvest festival, and that’s it.  So, if a Christian wanted to celebrate a harvest festival, he/she could celebrate Samhain separately from Halloween.   I personally celebrate Halloween as a type of harvest festival.  The stories of ghosts, goblins and witches associated with Halloween are just like the medieval Irish stories mentioned above:  they are mythology.  As such, they’re just part of the fun.
Again, as an Orthodox Christian, my lack of belief in ghosts does not mean that I don’t believe in life after death.  I just believe in the living experience of my Church, which is that people who die don’t come back to visit as floating ghosties.  When the Lord allows them to visit, they do so as fully resurrected people who confirm the holy Resurrection of Christ.  And again, resurrected people aren’t zombies.  Was Christ a zombie when He rose from the dead?  Certainly not!
My next article will deal specifically with All Hallow’s Eve, whether or not the original All Saints and All Souls Days in Western Europe were actually connected with Halloween, and the primary sources that show how our present American celebration of Halloween developed.   Until then, Happy Halloween and Joyous All Saints Day of the West!
In Christ’s Love,
Gabrielle 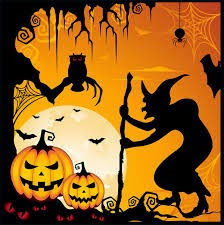 Posted by Gabrielle Bronzich at 5:15 PM

Gabrielle Bronzich
I am an Eastern Orthodox Christian who works professionally as a choral director and organist in churches of the Western confessions. I currently work as the Director of Music Ministries at a Missouri Synod Lutheran church. I attend services at my own Orthodox parish when I'm not working.